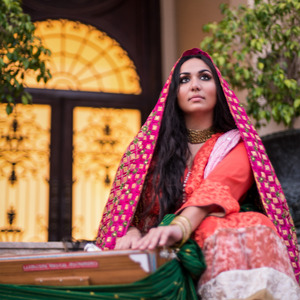 Blessed with a voice so pure it permeates your body and washes away your troubles in one soothing note, Manika Kaur is a rare and gifted soul. Her songs are songs of true devotion and her mission is to heal the world with her voice, as Manika says, hers are ...

"Kirtan for Causes". Her recent Guru Ram Das Rakho Sarnaee video has received an amazing worldwide response for its artistic and musical content on YouTube and all proceeds from her music go to charity.

Born and raised in Australia, Manika came from an extremely spiritual home where the family was, quite literally, responsible for spreading the teachings of the Sikh founder Guru Nanak Dev ji. Holy books would be delivered to their home and they would personally deliver them to the Sikh community across Australia, often stopping to join in song before they left. "The whole experience was divine. Every night our parents would tell us stories about our Guru's, and then later my brothers, sister and I would have "jam sessions". The boys would play the tablas whilst my sister and I would play the harmonium and sing bhajans" says Manika. Manika listened intently to many Ragi's, learnt to mimick her favorite singers and began writing poetry and while she had no formal training she soon became a gifted singer and began songwriting.

Her first recordings were in English with western producers until she met bhangra pop star Sukhbir Singh at a social event and that's when Manika's dream of recording an album came to life. Bandhanaa is Manika's offering of beautifully delivered Kirtan - devotional chants and hymns relaying messages of love, peace and truth. While the shabads are traditional, the album has a distinctly laid back feel with tracks that transport you to a beautiful island. And just as the sun would soak your skin and the waves would wash over you, so does her enchanting voice that soars and glides like a bird. Sukhbir's production brings Indian and Western instruments together to create a universal sound and even for those that don't speak the language, the message is crystal clear and very pure.

Every last penny raised through Manika's music is donated to help others less fortunate than herself or to building new Sikh temples that offer a place for her community to share, learn and practice their faith. Bandhannaa raised over a million dirhams, which helped finance, a new Gurdwara in Dubai where Manika lives and the proceeds from her next album are earmarked to help educate children from the rural parts of Punjab.

Spreading the message has been surprisingly easy for 30-year-old Manika and music is her way of giving something back. "Music is a wonderful medium through which one can spread any message. God has been really kind to me, and I'm sure I can do more. I have been blessed with a very comfortable life, but I feel that I must do something for those less fortunate than me. And I honestly believe that if each of us can look out for others a little bit more, the world would be a much better place to live in. Music has no barriers, which is why it brings people together. At times you don't need to understand it but you feel it. Kirtan has something more extraordinary, when you connect to it; you are connecting to the purest love. This is why people often cry when they listen or sing Kirtan. It is hard to describe the feeling even for someone like me who is unable to fully grasp the true meanings of our Guru's teachings, it feels like floating in a warm pool of light!"

It began with a dream. Manika Kaur held a CD in her hand. It bore her name, and it was dedicated to a cause close to her heart: the construction of a Sikh temple.

Kaur was an unlikely recording artist, though a talented, life-long singer. With no formal training but decades of connection to the complex and beautiful traditions of kirtan, Sikh praise music, Kaur never thought of herself as a vocalist or songwriter. Yet as she sat in prayer in her home’s prayer room as an adult, she often found melodies and musical ideas coming to her unbidden. Eventually, Kaur found herself urged and encouraged to record. The dream materialized into a debut album, and a temple in her home city of Dubai.

“When I discovered kirtan as a girl, it was a different feeling from any other music I had known,” reflects Kaur. “Kirtan brings a sense of peace. You’re singing the most beautiful love letters to God. It’s so deep and beautiful.”

Kaur’s depth of devotion is reflected in her ongoing commitment to use all proceeds from her music to further charitable causes. This album will support S.O.S., a Sikh children’s education initiative.

Kaur’s musical output is inseparable from her spiritual heritage. All her songs flow from her devout Sikh faith, from the songs and sacred stories her family shared as she was growing up in Australia.

“We’d sit after dinner, and my brothers and sisters and I would sing and play tabla and harmonium. It was very informal,” recalls Kaur. “My parents would tell us stories that would keep us strong and motivated. When we had these jam sessions, it was like CPR for soul.”

These soul-restoring moments, her family’s practice of kirtan, or adoration via music and rhythm, stayed with Kaur. Together with her siblings, she performed at temple functions, but though she loved music of all kinds, she never considered becoming a musician.

Then came the dream, and an unexpected journey. She made home recordings of the melodies and music that came to her in prayer. “The tunes pop into my head in the prayer room,” says Kaur, explaining her process. “I start singing the prayer instead of speaking it.” Thanks to several chance meetings—with bhangra heavyweight singer Sukhbir Singh, with her manager and musical instigator Vinod Gadher—Kaur embraced a new approach to these melodies and nurtured them into full, complex arrangements.

Kaur envisions arrangements in detail: a desert springing to life when the drought breaks, a river running past birdsong. Vivid imagery turns to vibrant, complex sound. On I Bow to You Waheguru, Kaur’s tender voice floats through dreamy layers of instruments and drones, which contribute an understated emotional and contemplative power to the traditional prayers and tales of teachers. Sweeps of breathtaking violin (“Aukhee Gauree”), dynamic flute (“Gur Ram Das Rakho Sarnaee,” a song dedicated to the fourth Sikh guru) and shimmering swarmandal (Indian zither; “I Bow To You”) add grit and texture to the lulling washes of sound.

Yet even when Talvin Singh’s tabla or Bernhard Schimpelsberger’s percussion kick in, the meditative steadiness holds. Kaur never strays from her source, from her powerful base in Sikhism and its welcoming, egalitarian devotion to God. “I have to trust what’s inside myself. I have to trust the voice that is guiding me. The universe is giving it,” she notes. “I had to be true to my voice, to find the best way I could express love for God.”